The second year of the Wurst & Bier Markt on Feb. 8th in Berlin was a smash hit. The organizers Slow Food Berlin, Wurstsack and Heidenpeters tea

med up with the Markthalle Neun crew to host this tasty event.

Thousands of hungry and thirsty people from Berlin and from across the globe showed up to consume beef- and pork-centric sausages and craft beer made by twenty constructive butchers and twenty craft breweries from Berlin, Germany or around Europe!

A large variety of Pils’, Pale Ales and IPA’s were featured to suit the dazzling array of cured sausages, smoked sausages, fresh ones and aged ones. But also a fine selection of darker beers and not to forget Berliner Weisse were offered alongside vegetarian food options, something for all tastes!

There was beer and sausage-themed merchandise available as well as sausage and beer pairings presented by Hendrik Haase aka Wurstsack and Koyka Stoyanova from Berliner Beer Academy, who demonstrated how sausage and beer accompany each other and which works best together.

So there’s the overview… let’s talk about the [some of the] beers that stood out for me and which I happily consumed ;)!

BrewBaker // I started off with – how could it be otherwise – their Berliner Weisse, a cloudy blond and crisp Weisse with a slightly fruity aroma and refreshing tart flavor. I’ve had it before from the bottle and was very pleased with it, but from tap it’s even better.

Ale-mania // Next up was Fritz’ Gose, his Saison and Belgian IPA. I had the chance to zwickel the Gose and Belgian IPA a couple weeks ago while visiting his brew house in Bonn and was very happy to sample both again. The highlight was his Saison though. Very fresh, peppery and a great balance between coriander and orange peel, nice body and smooth.

Brewcifer // On the board: Hops & Needles and Spark. Two brews who stood out for me on this day. I’ve heard about Brewcifer – a gypsy brewery from Hamburg – but never had a chance to try his beer, so it was long overdue. Both ales are definitely not your average beers. Hops & Needles, a pale ale brewed with spruce tips: sweet malty aroma with citrus hops and hints of oranges and pine needles which all repeat in the flavor. Spark, a chili spiced IPA, was …awesome! Who knows me gets the idea how I react when I hear chili beer, and hoppy chili, well that’s just right up my alley! It’s brewed with Bhut Jolokia, so you get a little spice – and only the spice not the unwanted green bell pepper flavor!! – but it’s surprisingly mellow with nice citrus hop aromas.

There were many other good beers that made it in my glass: Cherry on Top by Freigeist, From Asia With Love and Imperial Chocolate Mint Stout by Pax Bräu, Backbone Splitter and the new Black Nizza by Hanscraft; Schoppe Bräu’s XPA and Holy Shit and Wildwuchs’ Fastmoker Pils. 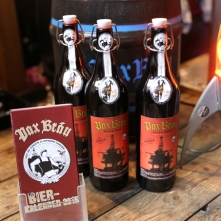 Last but not least two new craft breweries that surprised me with their solid brews. Flying

Turtle, a brew collective of Dan Stein, a Detroit native who moved to Europe eight years ago and Thorsten Schoppe, brewmaster of Schoppe Bräu, poured two brews – their Return of Pils and Kickstarter Pale Ale – from … well…. a flying turtle! One would describe it as a craft beer bike, they call it their “infernal machine” or simply an eye-catcher!

Second BRLO, a craft beer start-up of three dedicated college friends, presented a Pale Ale and a Helles. BRLO? Did they forget a letter or two? No, I was told. BRLO is the old Slavic term for Berlin and by adding -in it changes to “swamp” or “dry patch of land in the wetlands”. And their name speaks for itself, traditional handcrafted beers, brewed with sustainable, local ingredients reinterpreted for the modern craft beer enthusiast!

In a nutshell, it was a incredible day with delicious bites and amazing sips for every taste topped off with great talks and even greater people. I hope I get to go again next year and recommend everybody who’s in the area shouldn’t miss stopping by Heidenpeters in Markthalle 9 Tuesday, Thursday, Friday or Saturday afternoons and try one of their house beers or guest brews. It’s worth it!

Next up: BrauKunst Live in Munich. See you then! 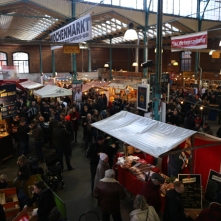 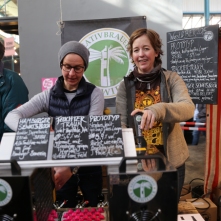 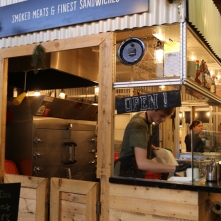 Granted, as a soccer fan and craft beer geek it’s not easy to find a good beer, not to mention craft beer, at one of the 36 Bundesliga stadiums in Germany. Aside from a few exceptions Pilseners of major sponsoring breweries rule the ranks of the stadiums and even the booths on the sports grounds. So unless you’re tailgating with a great craft beer in hand, you most likely have to suck it up and hand over the big bucks for a mass-produced beer!

It has become somewhat of a ritual for hubby and me to go to the stadium with a couple craft brews in the pockets, taking a picture at the train stop while waiting for the S-Bahn, toasting to a good game and get on the train with our fellows 🙂

It wasn’t any different at last nights derby game – SG Eintracht Frankfurt – FSV Mainz. We decided on the Palor and Colonia by the local Frankfurt microbrewery Braufactum. 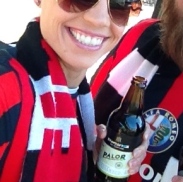 Palor is an English style Pale Ale brewed with Cascade and Polaris hops. Since we drank from the bottles [and you can’t taste color] I’m skipping the appearance description.

Cascade and Polaris give the Palor a distinct aromatic character with fruity, minty, slightly citrusy aroma notes. Good medium body and carbonation. Bold flavor of sweet malt, caramel, spices, and bread, leading to a dry finish. Actually a little too dry for my taste.

Colonia is not the typical Kölsch as you may think [and I thought] from the name, but a “Rhenisch-style bitter-beer” brewed with Saphir hops.

Bitter-beer? I must admit, I’ve never heard of this style but reading about the style it’s like an “Ur-Kölsch”, basically the ancestor of the Kölsch as we know today. That explains why I didn’t like it as a Kölsch. Although the aroma had notes of flowers and hops, its flavor was sweet with notes of malt and straw with a very bitter dry finish.

Bitter-beers are a top fermented ales, with a flavor probably something between Altbier and Kölsch, which makes it relatively quaffable but with a high malt content, which makes the beer sweeter.

We also met up with our friend Jörn, a SGE and beer fan, who is a local [craft beer]

restaurant owner and one of the founders of the Craft Beer Zentrum!

I was positively surprised. Thanks for sharing by the way.

It poured pitch black with a small white head – at that point we were equipped with plastic cups! The aroma was of roasted malts, hints of dark chocolate mixed with licorice. The taste was smooth also with roasty malts and slightly salty licorice; light bodied yet creamy. For me the licorice was overpowering the oatmeal though.

With the last sip we headed towards the gate and our seats and back into the Pilsener-emporium, ready to see our team take on the Mainzers!